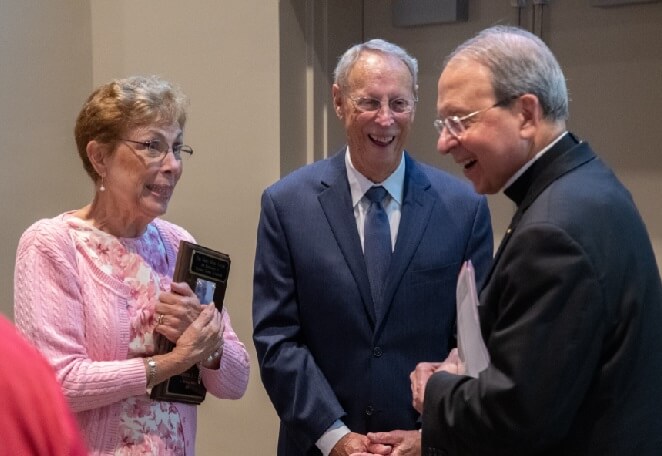 Larry Callahan, president of Our Lady of Mount Carmel School, Essex, and recipient of the Doris Musil Award, center, and his wife, Gail, talk with Archbishop William E. Lori following the Aug. 29 Archdiocese of Baltimore Convocation of Catholic Schools at the Church of the Nativity in Timonium. (Kevin J. Parks/CR Staff)

LUTHERVILLE – More than 1,300 Catholic school teachers and administrators assembled Aug. 29 at the Church of the Nativity with Archdiocese of Baltimore leaders to open the new academic year with a call to leadership.

“Rise Up,” the 2019 theme, echoed through ninth annual Convocation, from Archbishop William E. Lori’s homily through awards for teachers to naming former superintendent of Catholic schools Lawrence Callahan as this year’s recipient of the Doris Musil Award.

But he proposed that the life of John the Baptist presents four qualities of leadership.

“To be a leader, you must first be a follower,” he said, explaining John made it clear he was a follower of Jesus Christ. “He was not the Word. He was the voice,” Archbishop Lori said.

He urged Catholic educators to embrace their vocation as John did. “He boldly fulfilled his God-given vocation to its very end,” the archbishop said. “Teaching is a vocation.”

Teachers must be clear and courageous. “You are expected to make complicated lessons clear and spiritual truths evident,” Archbishop Lori said.

Finally, he asked educators to “give it all you got.”

“I really don’t think I need to say that,” he added. “This is what you do day in and day out.”

After Mass, longtime educators were honored, including two from Calvert Hall College High School in Towson, Christian Brother John Lawless for 65 years as a teacher, and Augustine Miceli Sr., who died in June and was honored posthumously for his 60 years of service. Archbishop Spalding High School’s Sheila Postlethwaite was recognized as a 50-year-veteran. 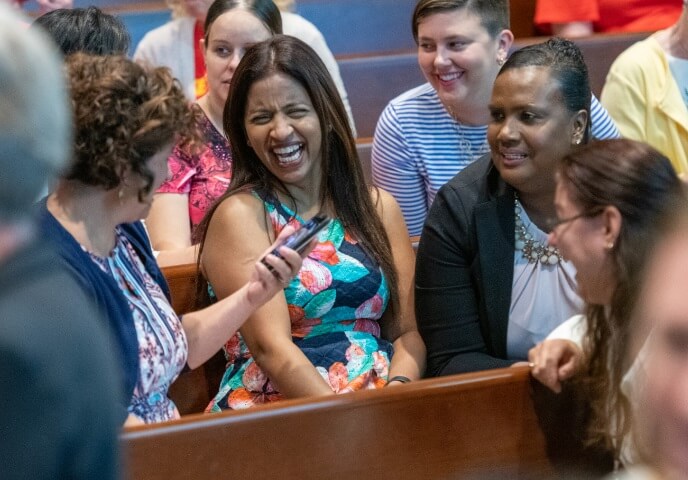 St. Francis of Assisi School, Baltimore, teachers Michelle Hoehn, from left, Angela Pinto and Doreen Williams share a laugh at the Archdiocese of Baltimore Convocation of Catholic Schools Aug. 29 at the Church of the Nativity in Timonium. (Kevin J. Parks/CR Staff)

Also honored were the teachers of the year from every school, including the three 2019 archdiocese-wide honorees, Kaitlyn Marsh of St. Mary’s High School in Annapolis; Rebecca Hogg of Mercy High School and Jennifer Karn of St. Mary’s Catholic School in Hagerstown.

Callahan received the Doris Musil Award, the archdiocese’s highest honor for Catholic school educators. He has worked in Catholic education since 1962 including serving as superintendent of Catholic Schools for both Baltimore and Washington, D.C. He became president of Our Lady of Mount Carmel School in Essex in 2016.

“In three years, Larry’s leadership qualities have the school operating on all cylinders,” said Archbishop Lori, nothing that pre-K-12 school’s financial position has been strengthened and enrollment stabilized.

“I believe there is no better vocation than being a Catholic school educator,” Callahan said.

He thanked his wife Gail for her sacrifices and understanding for the time spent away from their five children. “I share this award with Gail and my colleagues,” he said. “I believe you are only as good as the people around you.”

Service awards for teachers and students included one for St. John Regional School fifth-grader Caden Dusablon, who was on hand to receive his award for his random acts of kindness.

Rick Bernstein, founder of First Fruits Farm, said he counts on 10,000 volunteers to grow and harvest fruits and vegetables for food banks and Our Daily Bread on the 200-acre Baltimore County farm. The work, he explained, is inspired by the Gospel, which he and others on the farm share with visitors, including many who may never have heard the Word of God.

He challenged teachers to bring Jesus to their students. “A generation is at stake,” he said.

Bishop Parker, before the final blessing, asked everyone if they were ready for the new school year. “Yes, I am,” the audience responded.

For more photos and to order prints, visit our Smugmug gallery, here.

Catholic Schools Convocation: What is it with those shirts?

Listen to a radio interview with Dr. Donna Hargens, superintendent of Catholic Schools, below: