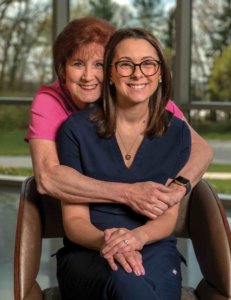 Joanne Venditti’s colleagues at Mercy Medical Center include her daughter, Lena, a NICU nurse, whose cancer was treated by members of her mother’s unit. (Kevin J. Parks/CR Staff)

Lena Venditti Petrik’s instinct to care for others doesn’t stop when she finishes a shift at Mercy Medical Center’s Neonatal Intensive Care Unit.

While the 29-year-old takes in Mass at Church of the Nativity in Timonium online during the COVID-19 pandemic, she worries about her grandmother doing the same.

“Without Mass in person, she’s having a hard time,” Petrik said. “It’s her only social outing.”

Family and faith are vital to Petrik, a fourth-generation graduate of the Institute of Notre Dame in Baltimore. She did more than follow her mother there; she also emulated her profession, as Joanne Venditti has spent nearly four decades as an oncology nurse at Mercy.

Their relationship is at the core of a substantial support system Petrik has leaned on, through her own battle with cancer and now her first pregnancy. 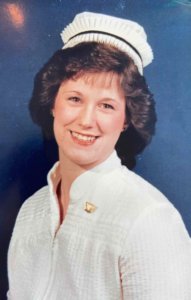 There was never a doubt Petrik would attend the alma mater of her mother, class of 1978; grandmother, Margaret Richardson, ’48; and a great-grandmother. Her family tree includes Aunt Kathleen, ’76, an X-ray technician; and great-aunt Betty, ’46, a.k.a. School Sister Elizabeth Sokel.

Her mother’s service to Mercy will reach 39 years in July. Venditti started in oncology when it was primarily an inpatient unit, and nightstands included, she said, a “Bible and an ashtray.” Now it’s an outpatient unit, where some just need a port flushed, but others are in for as long as 10 hours.

“My patients are the sweetest, most loving people,” she said. “They’re most appreciative of anything you do for them. You become attached. They’re our family.”

With COVID-19, she said, “They’re not only scared, they’re having to come in by themselves.”

Venditti grew up in St. Michael the Archangel Parish in Overlea. She and her husband, John, raised Lena and her brother, Vinny, in St. John the Evangelist, Long Green Valley. Both attended its parish school, and he went to Archbishop Curley High School. Lena’s parents were surprised when she went into nursing. 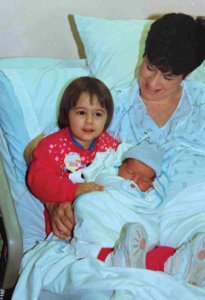 “We thought she was going to be a teacher,” Venditti said, noting her daughter’s health issues. “Her asthma was so bad. We had to hold her down as the pediatrician gave her needles. But she was bitten by the bug. Nursing is a calling.”
Petrik went to work part-time at Mercy in 2014, and since July 2015 has been among the approximately 80 nurses taking shifts in the NICU. It’s a Level III-B nursery, which cares for babies, approximately 450 a year, born prematurely or requiring special monitoring and care.

“Lena is an incredibly compassionate nurse, who cares for her patients and their families as if they were part of her own family,” said Dr. Susan J. Dulkerian, chairwoman of Pediatrics at Mercy.

Petrik grew into the job.

“I didn’t know if this was the place for me. We have to approach each day with (the) attitude: ‘Let me do the best I can for these little guys,’ ” said Petrik, who described cradling a boy born at 26 weeks weighing 770 grams, about 1.7 pounds. “You have to learn about each patient. It’s a rollercoaster. You take each little victory and run with it.

“The baby is your patient, and the parents, too. We’ve had teenage parents as young as 13. Education is part of the job. We have to teach them how to feed a baby and change a diaper.” 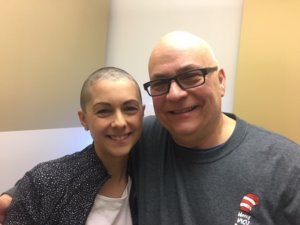 Lena Venditti Petrik is shown with her father, John, after she received chemotherapy. (Courtesy Joanne Venditti)

The pandemic has restricted visitors to one parent during a baby’s stay.

“With all of them, it’s the moms, and I feel for the dads,” Petrik said. “In the NICU, we’re almost in a bubble. I feel for the people providing hands-on (COVID-19) care. My patients, my co-workers, every nurse, doctor, every person in EVS (environmental services, e.g. janitors), I love them dearly. Being in the medical field, you’re going to go to work no matter what.”

Being immuno-compromised, she said, “heightens the fear of going to work every day.”

In December 2017, Petrik was at the Cheesecake Factory in Towson with her parents when she felt “a golf-ball-sized lump” in her neck. On New Year’s Day, she got the biopsy results: Hodgkin’s lymphoma, stage II, attacking the lymph nodes above the diaphragm. 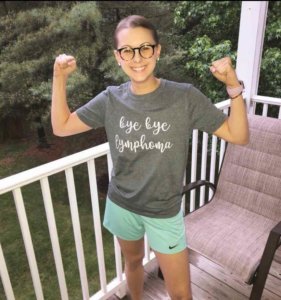 “I wanted my Mom to be the one to give me the results,” Petrik said. “When it was me going through it (cancer treatment), her best friends were my nurses.”

Her care was such that less than five months later, her cancer was in remission.

Last October, she married Andrew Petrik, in the chapel at Loyola Blakefield, his alma mater, with Father Willie Franken, a former pastor to the family, presiding.

Patients who have been treated for Hodgkin’s lymphoma deal with increased rates of infertility, but it wasn’t long before Petrik was pregnant. She and her husband are expecting a girl in August.

Petrik will celebrate two years in remission May 10.

This year, that happens to be Mother’s Day.