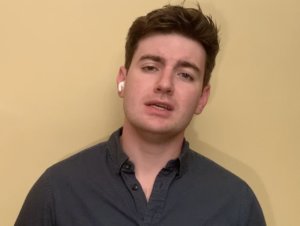 Tenor Emmet Cahill recorded a performance for the Mother’s Day concert from his home in Ireland. (Courtesy IHM Concert Series)

The coronavirus may have cut the season short for the Church of the Immaculate Heart of Mary’s annual concert program, but the pandemic won’t stop parishioners from celebrating the 10th anniversary of the beloved Towson music series this Mother’s Day.

The music series, which has drawn more than 400 people to some performances, will host a virtual concert at 4 p.m. on May 10 on the parish’s Facebook page. Performers will include pianist Lisa Weiss, oboist Heidi Dewally and tenor Emmet Cahill, who filmed his performance from his home in Ireland. The series will also revisit some of its greatest hits, featuring recordings of notable past performances.

“We were inspired by all the virtual online things with massive streaming because we’re all growing and adapting to the new normal,” said Thomas J. Bozek, organist and director of music and liturgy at Immaculate Heart of Mary. “And it’s also a way that families can celebrate on a Mother’s Day because obviously nobody is going out to dinner.”

The series had its last performance in February. Three of its concerts — the U.S. Army Field Band Soldiers Chorus, the Baltimore Mandolin Orchestra and Charm City Winds – were canceled because of the pandemic. All three of those groups will be represented in the Mother’s Day special.

The series got its start about a decade ago after the Baynesville parish installed a new pipe organ. Since then, the self-supporting music series has drawn talent from around the globe and often packed the church.

Deacon Justin Gough, who is set to become a priest in the coming months, is currently stationed at the parish and is spearheading the effort to assemble all the pieces into one concert special. Deacon Gough, who plays the organ, will also perform as part of the special.

Bozek said the anniversary concert is not a fundraiser, but any donations will go toward upgrading audio-visual equipment for the concert series. He said it’s likely online performances like this will continue in the months to come.

Even after the current social distancing measures are relaxed, Bozek said, concert sizes will be limited depending on the guidance from health officials.

“And there may be folks that are in the at-risk category that maybe won’t be comfortable coming out,” he said.