In challenging time, priests lean on their own loss as they bury the dead 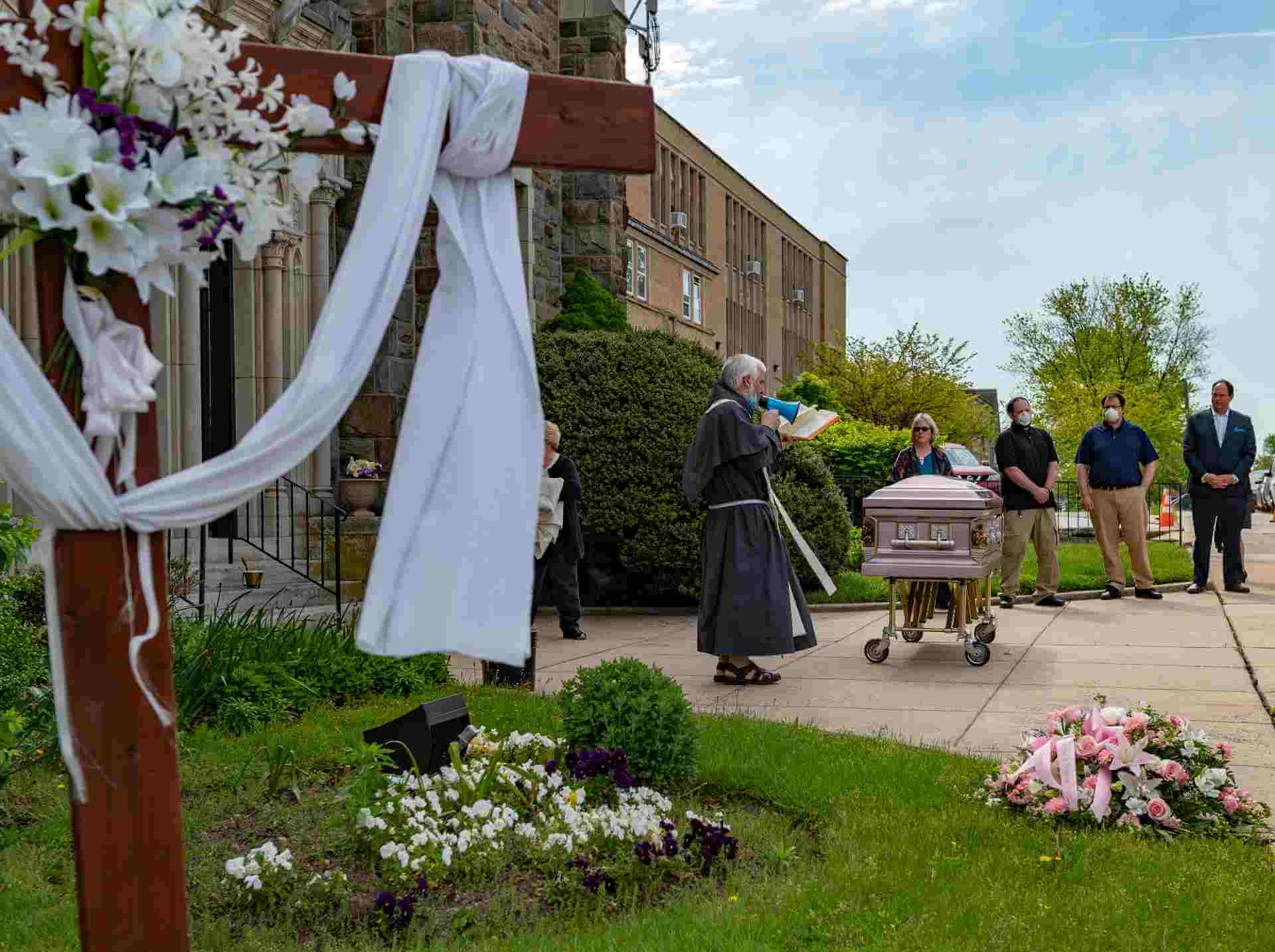 SIXTH IN A SERIES: Throughout 2020, the Catholic Review will explore the Corporal and Spiritual Works of Mercy. In this edition of the series, we explore burying the dead.

Father Dore was ordained a Franciscan priest in October 1992, seven months after the death of his grand­father. Assigned to a parish in Brooklyn, N.Y., that loss resonated at the first funeral Mass he offered.

“The funeral director,” the Franciscan friar said, “tells me that this old lady we’re burying had spent the last 10 years in a nursing home, never married, and there are only a couple people here. He told me, ‘You can make this a quickie, you know?’ I don’t know anything about this woman, but she obviously was a Catholic and her family wants to bring her to church for a funeral Mass. I thought of my grandfather at that moment. There’s no way I’m going to do a ‘quickie’ funeral for him.”

Father Dore became friends with the funeral director, and is grateful for the incident, as he said, “I decided on the spot, that I would never do a ‘quickie’ funeral. I would treat every single funeral as if it were my own family member.”

Sensitive pastoral care from priests in the Archdiocese of Baltimore, coupled with the support of funeral homes and cemeteries, has comforted many families during the coronavirus pandemic, when a 10-­person limit on gatherings has made it difficult to properly celebrate the life of a loved one. 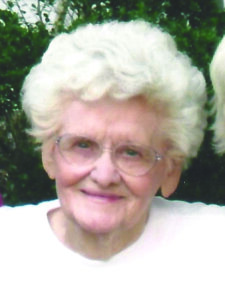 A graduate of Calvert Hall College High School and former teacher at Archbishop Curley High School, Father Dore returned in 2015 to his hometown, where he is the pastor of the Church of the Annunciation and St. Mary Clement Hofbauer in Rosedale, and St. Michael the Archangel in Overlea.

As the pandemic spread in March, he took to Facebook with poignant laments about graveside services where spouses, parents and children remained in their cars because of social distancing orders.

Father Dore shared about Maria Perez, of Queens, N.Y. She was visiting her adult children, who attend the Spanish Mass at St. Michael the Archangel, when she became ill with COVID-19, the disease caused by the coronavirus. Perez, 55, never made it back to New York, and her children, sick and in quarantine, could not attend her committal service.

Margaret Mary (Leppert) Winter, who served St. Michael the Archangel in many capacities, among them as president of the sodality, died April 4 at Stella Maris, two months shy of her 100th birthday and with no family present, because of the state’s no-visitors policy at nursing homes.

Told of her affinity for the parish, Father Dore arranged for the hearse carrying Winter from funeral home to cemetery to detour to St. Michael the Archangel.

“We were so sad that there wasn’t going to be a Mass, so (Father) Tim suggested we stop by St. Michael. The few of us who were there got out of our cars, and he read some beautiful prayers. He went out of his way to make it nice for us.”

Winter’s arrangements were handled by Schimunek Funeral Home in Nottingham, which has seen an increase in COVID-19 victims. 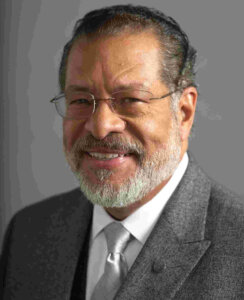 The pandemic has disproportionately hit the elderly and minorities.

The 21215 ZIP code, in northwest Baltimore, has been one of the hardest hit in the state. St. Ambrose in Park Heights is the only Catholic parish in that ZIP code. Capuchin Franciscan Father Paul Zaborowski, the pastor, who has taken to the streets to distribute face masks, said that as of May 13, none of his parishioners had died of the coronavirus, but many were in mourning for family members.

“One woman lost her brother and sister-in-law, within a week,” said ­Father Zaborowski, adding that Andre Johnson, a contractor who had just finished work at the parish office, died of COVID-19. “The isolation is the most devastating part. People are hospitalized and they’ll pass alone. That’s what most people have a difficult time getting their heads around.”

“The fear factor caused people to avoid the victim of the disease,” said March, a parishioner of St. Ann in Baltimore. “The fact that we’re just getting a handle on treatment for AIDS, this virus could be around just as long.”

“Families have the unexpected death of a loved one, and the grief associated with that,” March said. “Then you’re not able to mourn in a traditional manner. You can’t visit a loved one in the hospital, and say goodbye there; then you can’t say goodbye in the post-­mortem sense. None of the things that make for a normal transition are there.”

In telling families that “you can’t have what you want” and having to limit mourners, he said, his industry has had to serve as “social gathering police.”

“My mom died in 2006,” March said. “I can’t imagine laying her to rest in these circumstances. African- Americans celebrate in birth and death. For many cultures, these are milestones you mark your heritage by. COVID-19 has disrupted that.” 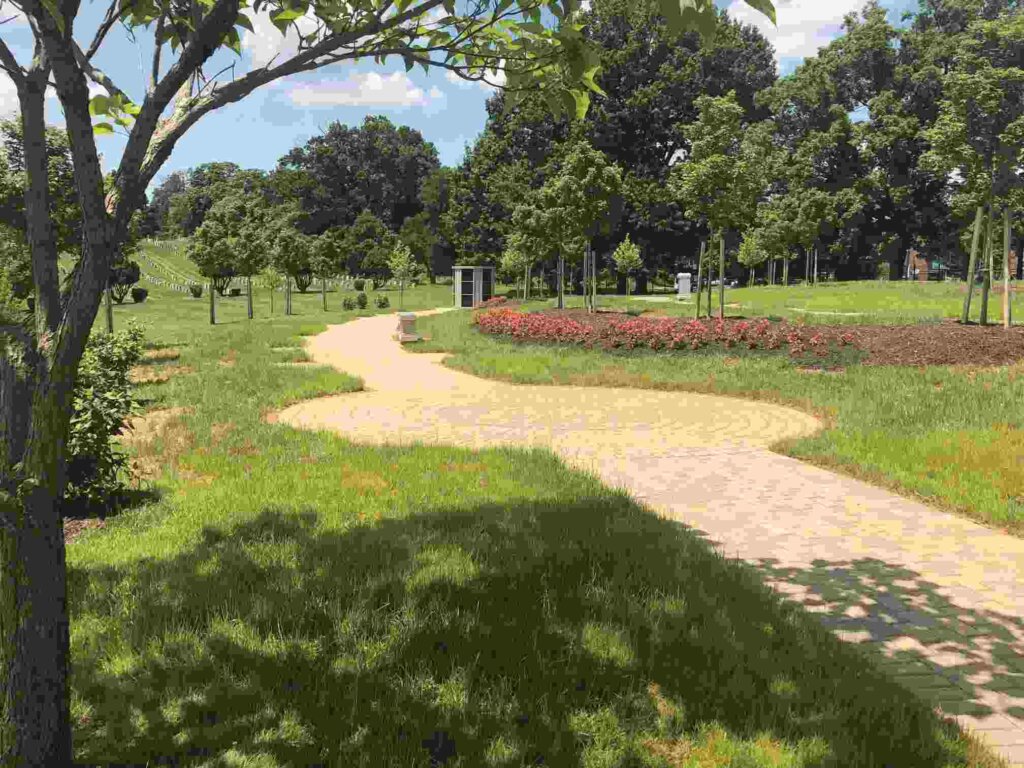 Nathan Nardi is director of New Cathedral Cemetery, the only one operated by the archdiocese.

Its adjustments incude not placing chairs graveside, purchasing a PA system so ministers can be heard by people staying in their vehicles, and remaining open 24 hours a day.

“How many people were not able to come to a service, because of restrictions?” Nardi said. “We didn’t want anyone to be blocked.”

“Thirty percent of our business is cremation, and we’ve seen nowhere near the normal (amount) the last two months,” said Nardi, mindful that many memorial services are on hold.

Nardi works with Father Patrick Carrion, pastor of St. Bernadette in Severn and director of cemeteries for the archdiocese. His brother, Father Michael Carrion, suffered a heart attack and died Nov. 30. His funeral Mass was at Immaculate Heart of Mary in Baynesville, where he had pastored.

“It became a family funeral, for my family and the parish family,” Father Carrion said. “We probably had 600-700 people at the Mass. I talked to hundreds more at (two) viewings. The comfort you receive in that outpouring of people bolsters you, and kind of distracts you from the reality.”

Father Carrion talked of the practices of his Irish ancestors, and Jewish people “sitting” shiva. 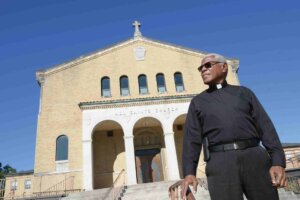 Father Donald Sterling is shown outside New All Saints in Liberty Heights, where he led a brief funeral service for his mother April 3. (Kevin J. Parks/CR File)

“Right now, those rituals are minimized,” he said.

Jeanette Sterling, the mother of Father Donald Sterling, pastor of New All Saints in Liberty Heights, died March 25 at age 91. A brief viewing and funeral service with limited numbers were held at New All Saints April 3, and she was interred at New Cathedral. A fuller memorial is planned.

She had slowly deteriorated over the years, Father Sterling said, to the point where his mother was nearly in a “vegetative state.” In this instance, he said, “you see death as peace.”

“This is not life as it was designed to be,” Father Sterling said. “If we really believe in the Word, then death really is going home. So many of us, I think, forget that this (life on earth) is not heaven. This is not a full relationship … with God. It is only through death that it’s restored.”