New Baltimore auxiliary bishop wanted to be a ‘frontier priest’ 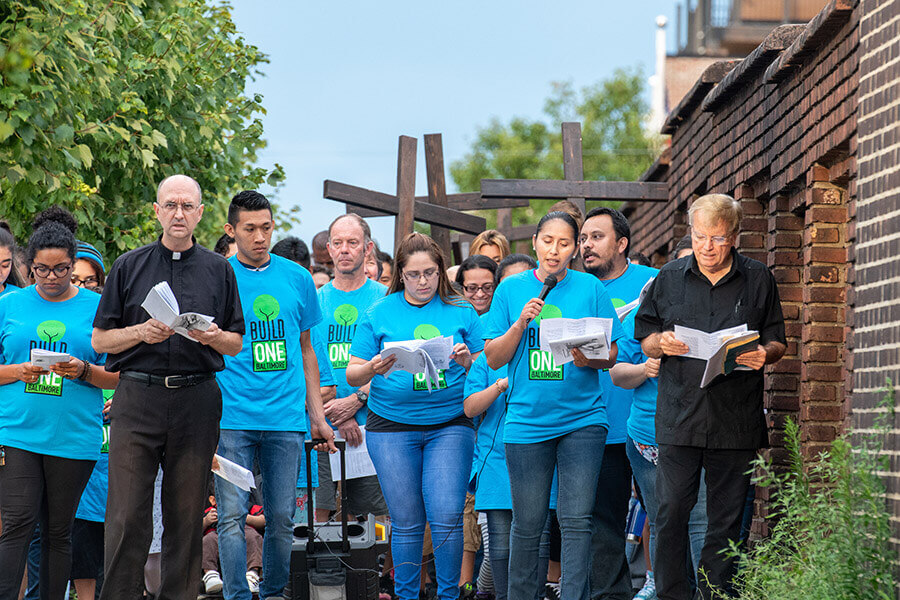 Redemptorist Father Bruce Lewandowski was headed to the cemetery June 1 for a graveside service when he got a call from a number he didn’t recognize.

Normally, he lets such calls go unanswered, but since a lot of his parishioners are suffering with COVID-19 these days, he picked up the call.

The caller was Archbishop Christophe Pierre, apostolic nuncio – the pope’s representative in the United States – relating that Pope Francis had selected the pastor of Sacred Heart of Jesus/Sagrado Corazón de Jesús Parish in Highlandtown as the archdiocese’s new auxiliary bishop.

He realized they were conversing in Spanish and remembered that the nuncio had spent a lot of time serving in Mexico.

“It really caught me by surprise because that was not the kind of call I was ever expecting to get,” the bishop-designate told the Catholic Review two days before the appointment was made public. “I think I said, ‘Are you sure you have the right phone number?’”

The nuncio assured him it was correct.

“As a Redemptorist, I’m very much aware that St. Alphonsus (Liguori, founder of the order) had advised us never to accept these kinds of ministries. This is not the ministry for a Redemptorist,” Bishop-designate Lewandowski said. “And if we do accept this, it’s only through obedience.”

He reminded the nuncio of this admonition from St. Alphonsus, to which the nuncio replied that the pope is the highest authority. 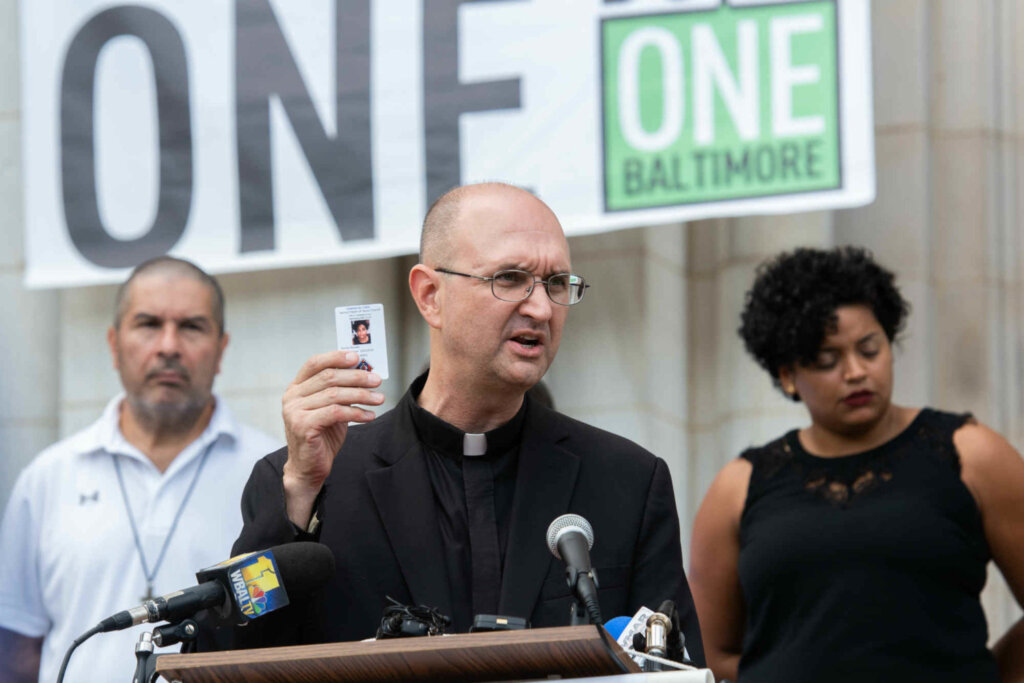 “And I said, “Maybe I should talk to my provincial first.’ He says, ‘No, no, no. The Holy Father is the highest authority. So you don’t need to consult anybody.’”

After talking for about 10 more minutes, Bishop-designate Lewandowski said he accepted.

“I’m very humbled and I never saw this coming.”

His vocation started at a very young age. An aunt who lived with the Lewandowski family often said to young Bruce at around age 8 or 9, “When you’re a priest pray for me,” as though it was a fact or an expectation. In third grade at his home parish’s school, the class was assigned to write a composition about what they wanted to be when they grew up. He wrote then that he wanted to be a priest.

The parish, St. Gerard in Lima, Ohio, was run by Redemptorists, and Bruce thought that was the only kind of priest there was. He was further inspired by a small book he received from his grandmother about a frontier priest who ministered to the people of upstate New York and Ohio – part of his own world – on foot and on horseback. The priest was St. John Neumann, a Redemptorist.

Having grown up on a farm with horses and other animals, he was fascinated.

“I would think, wow, this guy lived in Ohio and he was on horseback and trekking through the woods and in log cabins and reaching out to people who were Catholic, bringing the sacraments,” Bishop-designate Lewandowski recalled.

“This idea of a priest on horseback really appealed to me. … I’d love to be a missionary on horseback, going through the woods somewhere and bringing the word of God and the sacraments to people.”

After a visit during eighth grade to the order’s high school seminary in Pennsylvania, five hours from Lima, he said he couldn’t think of doing anything else, though he said he is surprised even to this day that his parents let him go to a school so far away. His parents were supportive and open.

“They said, if you ever want to come home and you find out this isn’t for you, that’s no problem,” he said. “It’s your life, it’s your decision. Go with the Holy Spirit.”

One of his siblings is a Felician Sister in Detroit, Mich.

“It’s good to be able to speak with someone in your own family about some of the ups and downs of life in the church and in religious life,” he said. “I have a close family. We talk to each other almost every day, … and we’re really supportive and helpful to each other.”

Though he studied Spanish in high school, he didn’t really dive into the language until college. While he was a candidate for the priesthood, he and other students went from St. Alphonsus College in Suffield, Conn., on a trip to the Dominican Republic, where they visited other Redemptorists working in the area of San Juan de la Maguana, where he saw in real life the same theme of ministering to the people that he had read in the book about St. John Neumann.

“We went from village to village, celebrating the Mass and other sacraments with people,” Bishop-designate Lewandowski said. “In the daytime, we would work with people harvesting beans – habichuelas – and at night we would have the Mass.”

On a 100-kilometer trip on foot to a mountainous region along the border with Haiti, he had a chance to practice his Spanish with a local woman. He was complimenting the priest he was with, Redemptorist Father Brian Kennedy, who used solar energy to purify water and cook, dug wells, built a house, rode a motorcycle and knew basic medicine.

“And she looked at me, very seriously and said, ‘You think that’s great. You know, it’s even better than that. He brings us the Eucharist.’ And right at that moment, I said this is what I want to do with my life,” Bishop-designate Lewandowski said.

He intensified his studies in Spanish, hoping to eventually serve in Redemptorist missions in the DR or Paraguay. When he got his first assignment, it was to Spanish Harlem in New York City.

Ever since, he has served in parishes with significant Latino populations in New York, Pennsylvania, Wisconsin and now Maryland.

“I have had the blessing, the grace, the privilege, the honor – what I think is one of the greatest experiences of my life – of being able to accompany and live with, work with, pray with, serve with, celebrate with our Latino brothers and sisters,” Bishop-designate Lewandowski said.

“They have welcomed me as a member of their community in a way that I never dreamed or imagined. And I find it is mission territory within our own country, in a certain sense.”

Part of it is simply being there with people and for people, but he also tries to make the church alive here for people who speak Spanish and come from different countries and cultures.

He has gotten involved in social justice causes, such as helping promote a Parish ID program, recognized by the City of Baltimore, that helps immigrants who might not have a driver’s license prove who they are.

“Salvation should affect the whole person. As a church, we’re not just about saving souls. Souls have bodies and bodies have souls; it’s a whole person,” the bishop-designate said. “I think the church should do its best to help people live well in this world, not just to live well in heaven after this life.”

He said his first pastor in New York encouraged him to be involved in social justice issues as a way to put faith in action. It’s hard to offer the Gospel to someone who does not have a house, or only the Eucharist to someone who has no food on their table at home.

“We want to make sure we’re giving the hopeful life of the church, and that includes works of faith and justice,” he said.

As the archbishop’s delegate for Hispanic Ministry and soon as an auxiliary bishop, Bishop-designate Lewandowski said that often people live in silos and don’t have a chance to encounter one another.

“One of the beauties of the Catholic Church is that we can encounter each other through our common faith in Jesus Christ. We might pray differently, worship differently. But it’s the same belief, it’s the same Lord that we love, that we serve, that we give our lives to,” he said.

Inspired by Pope Francis, he tries to “bring people together to meet each other face to face, to listen and be listened to, to be able to see the face of God in the other.”

Parishes in the City of Baltimore are not yet open for public Masses, so the bishop-designate is a little anxious that his parishioners will hear the news of his appointment and show up at the church to celebrate. He encourages them instead to stay at home.

As an auxiliary bishop, he expects his ministry to become broader in range and scope, beyond the boundaries of Sacred Heart of Jesus/Sagrado Corazón de Jesús Parish and St. Patrick.

“I’ve been focused very much on the parishes where there is ministry to our Latino brothers and sisters. And so, this just makes the family all the bigger,” he said. “I need to get to know them and let them know me.”