Response grows to those out of work, on front lines during crisis

One family more than doubled a Frederick County parish’s monthly contribution of casseroles to Our Daily Bread, the soup kitchen which feeds hundreds in Baltimore.

A high school coach turned his downtime into a foundation-worthy effort that takes meals to staff at 16 hospitals in and around the Beltway.

And in northwest Baltimore County, plans to help 40 families in need ­morphed into a loaves-and-fishes-like drive that sent food to 1,300 homes.

The COVID-19 pandemic has taken lives and strained healthcare workers. It has shuttered businesses, putting more in a hand-to-mouth existence and further burdening food banks and soup kitchens. Fortunately, many are doing something to stem those needs. 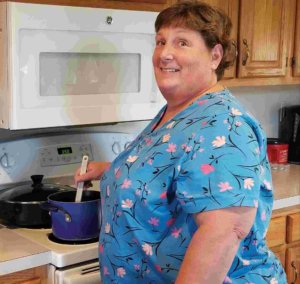 Robyn Jacobs of St. Peter the Apostle Parish in Libertytown has increased her casserole output to Our Daily Bread. (Courtesy Robyn Jacobs)

In northeast Frederick County, the Social Concerns Committee at St. Peter the Apostle in Libertytown has operated a Friday afternoon food pantry, stuffed backpacks with nonperishables for students at Liberty Elementary and been among the dozens of parishes preparing the casseroles that are a staple of the daily meal program at Our Daily Bread, now grab-and-go meals.

In a normal month, that delivery has been 50 casseroles. In March, it totaled 140, thanks to Robyn Jacobs, vice president of the parish Ladies Club, which prepares post-funeral meals when they aren’t limited to 10 mourners.

In a normal month, Jacobs prepares two casseroles for Our Daily Bread. On Feb. 28, she and her daughter, Sarah Mason, prepared 55 in Jacobs’ kitchen.

“We were cooking like crazy,” said Jacobs, who made her first trip to Our Daily Bread to drop them off March 4. “You would have thought I’d brought $1 million. It felt so good to deliver those meals. You don’t have to be a chef to do this.”

Drew Forrester also found himself with time on his hands after the pandemic shut down the spring high school sports season, which included the golf program he directs at Calvert Hall College High School in Towson. 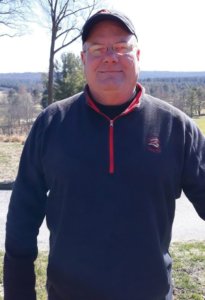 Forrester has been a general manager of professional indoor soccer teams, talk radio host, blogger and tour guide, an expertise the archdiocese tapped in September 2015, when he coordinated the buses that took pilgrims to Philadelphia to see Pope Francis.

In late March, one of his fans, Frank Del Viscio, sent Forrester $200 and told him “to put it to good use.” Forrester brainstormed with assistant coach Brian Hubbard and applied his organizational skills to the “Frank Fund.”

With more than $5,000 in donations and contributions from a half-dozen restaurants as of April 17, Forrester and Hubbard have delivered an assortment of breakfast, lunch and dinner options to hospital workers.

“We talk about setting an example for our players,” said Forrester, a parishioner of Immaculate Heart of Mary in Baynesville. “We hope nothing like COVID-19 happens again, but if it does, we hope they understand the importance of helping others who are (working) to keep people safe and healthy.”

Laura Trageser, a respiratory therapist at Sinai Hospital, is among those who have been fed by the “Frank Fund.”

“Work is mentally and physically exhausting right now,” she said. “You eat quickly, because you don’t know when you’re getting a break. When you have food provided, energy is one less thing to worry about.” 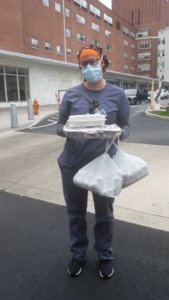 The closure of the Luke paper mill last summer made Divine Mercy Parish, based in Frostburg, even more of a vital resource. Its worship locations include St. Ann in Grantsville, which hosts a food pantry once a month in conjunction with the Maryland Food Bank and Catholic Charities of Baltimore.

According to Margie Meyers, director of mission at Divine Mercy, its advocates include Regina Holliday, a member of a local Lutheran church who runs a nonprofit thrift shop in Grantsville. With its free food shelf closed, she’s coordinating with St. Ann in direct food deliveries to households in need.

Holliday is the mother of an eighth grader at Bishop Walsh School in Cumberland, where the softball and cheerleading teams have helped feed the staff at UPMC Western Maryland. 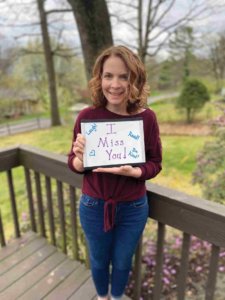 The religious education program at Divine Mercy Parish, meanwhile, had filled 555 plastic Easter eggs with candy for a giveaway after its last family session April 19. When the event was scrapped, lead catechist Joy Wilt took them to the Union Mission Rescue in Cumberland, where the full occupancy included 18 children.

The pastorate of Sacred Heart in Glyndon and St. Charles Borromeo in Pikesville includes a substantial Hispanic community. Its social justice committee includes Mario Jerónimo Sandoval, a native of Guatemala who works as a cook in Eldersburg.

“Many immigrants clean houses, are in child care or construction,” he said. “Many have lost their jobs. They’re not getting paid, and families don’t have food to eat.”

By late March, members of the Hispanic community were dipping into their own pockets to help fill that need. 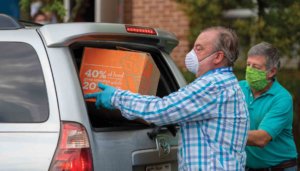 “The need snowballed out of control in two weeks,” said Jamie Donaldson, director of mission for a pastorate that includes the St. Vincent de Paul Society on both campuses, and plenty of people ready to chip in to a planned Easter Sunday food distribution. “We’ve got 3,000 families, and a third were actively involved, whether it was a can of food or $450 donation.”

Partners included Amigos of Baltimore County, which connects Latino families to resources and had already bolstered a similar effort at St. Gabriel in Woodlawn, and the Maryland Food Bank, as what was supposed to be a relatively small outreach turned into a major effort.

The distribution involved a brigade of parishioners, seminarians and Archbishop William E. Lori moving boxes of food from the school gymnasium to a line of cars that numbered 750, according to Donaldson.

RADIO INTERVIEW: Increased demand at Our Daily Bread/How to make an act of spiritual communion

Our Daily Bread keeps up with surge in demand

Franciscan Center triples the amount of people it feeds during pandemic