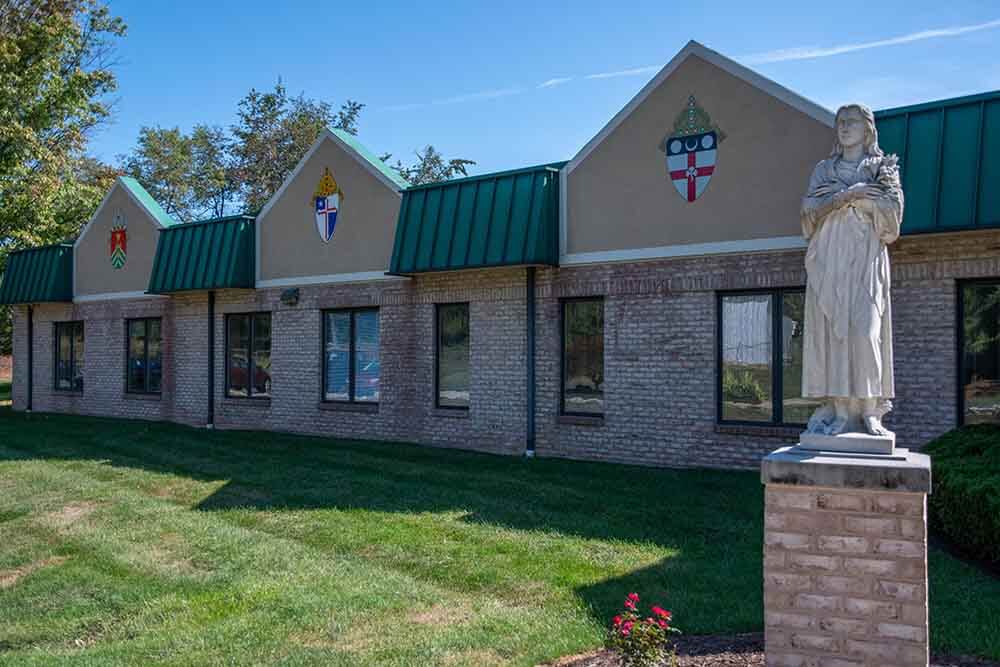 Shields of the Catholic communities attending St. Maria Goretti High School in Hagerstown include the Diocese of Wheeling-Charleston, W.Va., from left, Archdiocese of Baltimore and the Diocese of Pittsburgh. (Kevin J. Parks/CR Staff)

HAGERSTOWN – The dedication of a new academic campus for St. Maria Goretti Catholic High School Sept. 3 included a stroll down memory lane, albeit a sometimes soggy one.

A morning soaked in sunshine was in contrast to what school president Chris Cosentino described as “the biblical rains” that soaked the Mid-Atlantic Region in 2018, graphically exposing the flood plain on which the old St. Maria Goretti School had stood.

April 16, 2018, is “when the arc started to sink,” joked Christin Kinman, Western Maryland project manager for the Archdiocese of Baltimore’s Division of Facilities and Real Estate.

A parishioner of St. Ann in Hagerstown whose youngest child, Patrick, is a Goretti sophomore, Kinman spent the last Saturday of 2018 at the school, in work boots and manning a five-gallon bucket, “afraid of losing the boiler.”

By then, school and archdiocesan leadership were actively exploring alternatives to a building that opened in 1955, to the relief of faculty members such as Andrea Shepheard, the math and science teacher charged with launching the Project Lead the Way program at her alma mater, one which will presumably go smoother in its new surroundings.

When Shepheard turned from a career as a chemical engineer to a Goretti classroom in 2012, she found the same lab equipment she had worked on as a student in the early 1980s. Some relatively new lab benches, made possible by a grant from the Knott Foundation, made the 1.3-mile trip from the old campus to the new one, which blessedly, was already equipped with air conditioning.

When did that notorious shortcoming at the old school hit the hardest?

“In August, when sweat would be dripping down my back at 8:30 in the morning,” Shepheard said.

Late-summer heat and winter cold will no longer be issues for 190 students spread out over nearly 25,000-square-feet on a single floor that formerly housed Purdue University Global, an online learning venture.

St. Maria Goretti has a four-year lease on the Crestwood Drive property, with an option to buy.

The settling-in process was evident in a classroom lectern advertising the brand of the former occupant, and Shannon Storch, whose hiring as principal was announced in mid-August, removing his necktie to help with some physical tasks an hour after the dedication.

“Not only was this building transformed this summer, you should have seen what it looked like two weeks ago,” Cosentino said in remarks. “It became quickly apparent our faculty were not only committed to teaching, they were equally committed to heeding my advice to make this space their own. 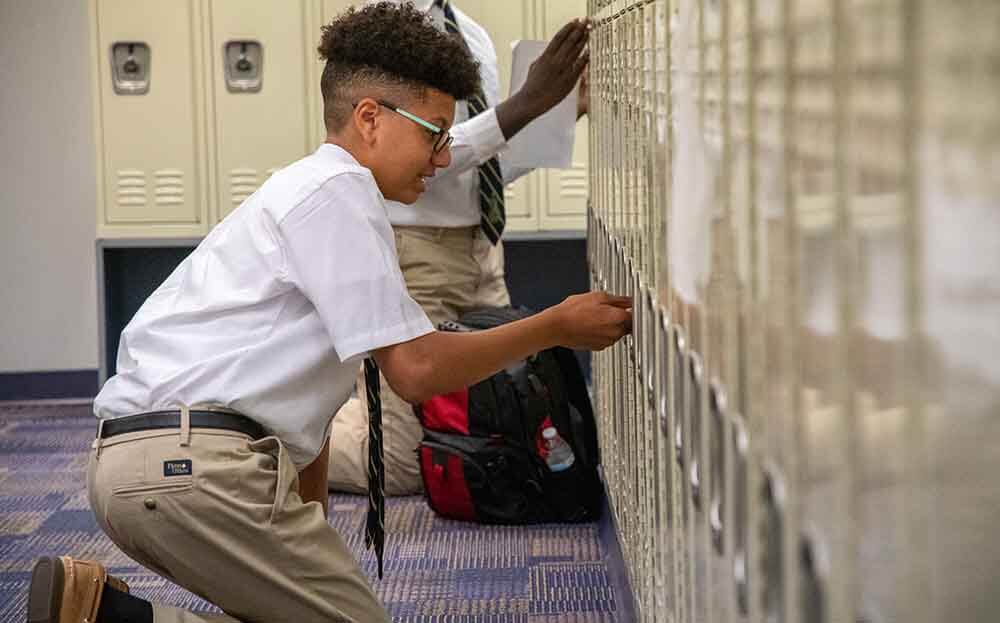 “Our faculty have always been dedicated to offering the best education to our students. Now … we truly have a space for 21st-century learning.”

The dedication took place in St. Elizabeth Ann Seton Hall, a converted media center which can accommodate assemblies, lunch and school-wide liturgies. It includes a smaller chapel, with the altar that was in the former St. Maria Goretti Adoration Chapel.

“It probably belonged to the School Sisters (of Notre Dame). It felt right that it should come here,” Kinman said, of the order of religious women who provided a majority of the faculty when the school opened and maintained a convent on the Oak Hill Avenue campus.

Cosentino presented a bouquet to Kinman, whose work takes her from Frederick to Frostburg, for the hours she put in on the relocation.

In his remarks, Archbishop William E. Lori noted his hope that this “beautiful ministry of St. Maria Goretti will move forward even more effectively, (in a setting) where you will have the tools that you need to become the persons that God has called you to become.” 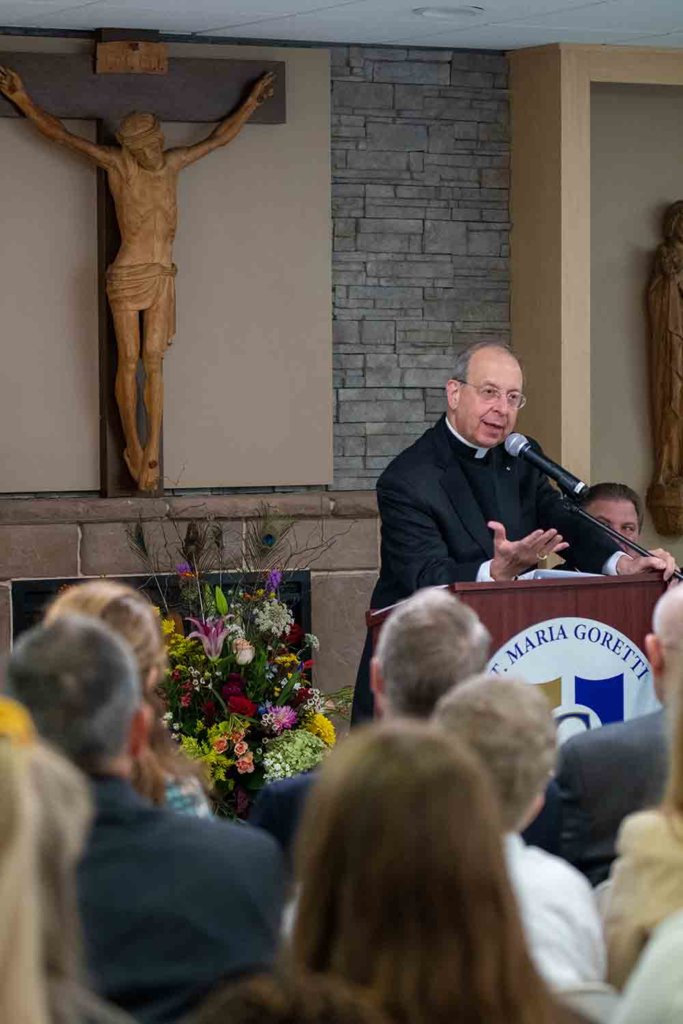 Opening and concluding prayers, respectively, were offered by Monsignor Bruce Jarboe, pastor of St. Ann and the canonical representative on the Goretti school board, and Father Ernest Cibelli, pastor of St. Mary, also in Hagerstown.

Attendees ranged from Timothy Trainor, president of Mount St. Mary’s University in Emmitsburg, to James Martin, the recently retired math teacher who was among those who inspired Shepheard to obtain degrees from Virginia Tech and Drexel University.

As if their respective shields on the front façade weren’t reminder enough of the school’s “Tri-State” nature, posters promoting vocations for the Archdiocese of Baltimore and Dioceses of Harrisburg, Pa., and Wheeling-Charleston, W.Va., were on display in a reception room.

“This is a huge morale boost,” said Nate Molloy, the vice president of the senior class, who came to St. Maria Goretti from Corpus Christi Elementary School in Chambersburg, Pa.

Heather Nees, the campus minister and religion teacher, has big plans for her 14th year on the staff of St. Maria Goretti.

“It’s a better learning environment,” said Nees, a parishioner of St. Bernadette in Hedgesville, W.Va. “My classroom doubled in size, and air conditioning is a drastic difference.”

Athletics remain based at the old campus, where the Gael Center, home to the Goretti’s basketball and volleyball teams, as well as weight training facilities, and baseball field are above the flood plain.

For more photos or to order prints, visit our Smugmug gallery here.